Murder in the 17th District

The slow lurching seemed to last for hours. The journey didn’t feel so long when we came in the Moskvitch. Houses with gardens, industrial estates, gardens, warehouses, more gardens, corner stores. The bus crawled along the level ground, grey snowdrifts in the drainage ditches. The water tower always visible, always from the same distance. “The next stop is Erdősor Street.” Trust and Precision LP, Clever Dachshie Training Park. My mom always asked the Old Guy why he kept Artúr, the mopey Kuvasz sheepdog, on the chain. You had to take the bend slow. In the field, sporty German Shepherds and spaniels darted from one stake to the next as the owners in their windbreakers stamped their feet. The Old Guy drove slowly, he turned off the engine at the red lights to save petrol. My mom groaned something in the silence and the two of them grumbled to each other. They didn’t want me to hear. The traffic lights hung on thin cables, creaking in the wind. When the signal changed to green the Moskvitch didn’t move. The old man jerked at the ignition, the cars behind honked. I huddled in the back seat as my mom turned and looked out the window. I never understood why she had such a cold stare.

My breath leads the way along the cracked sidewalk and a row of poplars separating the market from the street. The weather app says the temperature is minus 2 degrees Celsius. I pull my jacket around me and think of my fur coat. I left it behind in Zoltán’s linen box, I moved out in the fall, in sweater weather. It was an antique, the spring was gone. It took two people, one to hold it open, the other to rummage inside.

I don’t want to ask any more favors from him.

Something is falling from the sky in tiny drops, not snow and not rain, but icy ash, tickling my nose. For years the kennels had stood empty in the yard. I was last here fifteen years ago when we bought the little dog. My daughter fell in love with it and immediately named it Snowball. We’d never seen a white Chow Chow before. My mom’s only words were, this won’t end well. I didn’t get what her problem was, she of all people, she’d bred Chow Chows for twenty years. Soon after, bloody abscesses started appearing on Snowball’s body. In tears, my daughter applied ointments. We washed the dog with medicated shampoo, shaved its coat, but nothing helped. The dog hurt even when we pet it. Finally, we shut it out for the night at the end of the yard, in the kennel furthest away, where it howled and whimpered and then suddenly fell silent. By the morning it was frozen to the ground. Tears streaming down my face, I used a shovel to scrape the shriveled, bare little body from the concrete floor.

“He’s the stinkiest thing I ever smelled, mom.”

Luckily she didn’t say it in my mom’s company. I kissed my daughter and tucked her in. I didn’t have to wait long for her to fall asleep.

My mom had written letters to the Old Guy for months before they’d met.

She had put an advert up in the Women’s Magazine lonely hearts column, under Happiness 1184. A few days ago I found the handwritten letters. I could make out the penciled lines on the page, later erased. The Old Guy wrote in a neat cursive, the only thing that lent him any elegance and beauty. At the end of their first meeting, he wet himself, and then it turned out he lived in a three-story house in the 17th district. I didn’t tell my daughter, but children usually sense what’s going on. I’m not interested in what he smells like, my mom would have said and closed the discussion. A few weeks later, they were already walking to the Polish market together on Sundays. My mom sold her handicrafts. They sat on upturned plastic crates counting her returns together. The Old Guy hollered like he knew everyone, my mom constantly shushed him. The market is empty now, the snow crunches under my feet. I’m walking along the pet aisle, it was here somewhere we spotted Snowball. The white Chow rarity, it cost fifty-thousand forint. I can smell the fried sausages, though it’s Wednesday, there hasn’t been anyone but stray dogs here for days. Between the concrete paths is a grey sea of muck, on weekends hundreds of white trucks line up here. A trail runs around the inside of the pen, water has frozen in it, ponies have tramped around the earth here for decades. I lean against the wooden fence. Zoltán and I never got to see the Lipizzan.

Before then, my husband and I took my mom to the dog shows. She said the same about him as she did about the white dog, and she was right. I was still young, practically a teenager. We brought the Chow Chows in the trunk of the Wartburg station wagon, my mom in the back seat grinding her teeth, my husband driving. We mostly went to Yugoslavia and Romania. On the way out we delivered contraceptive pills, on the return, certificates and medals. My heart raced when we saw the Romanian border guards, but my mom just stared out the window, unflinching.

Her bag was full of contraceptives.

There’s women’s underwear and embroideries inside. It’s a gift, she merely said when once they asked what she was carrying. The soldiers never looked in her bag. In Satu Mare, we had to drive straight into the yard so the neighbors wouldn’t see the Hungarian license plate. We weren’t to speak Hungarian on the street. Used plastic bags dried on the balconies, the streets and the windows were dark. Brown tin fences, yellow gas pipes, snarls of electric cables. The stores were empty, the shelves bare. In those days the Polish market had ripped jeans for sale, which I got from my mom for my seventeenth birthday. You could buy anything at the Polish market: Soviet radios, Western showers, Maxwell, Adidas. It was a long time before I understood why the men in cowboy hats and pickups there spoke Hungarian when at home we called them Romanians.

I don’t remember this row of poplars. The ones behind the funeral home are the same. While the priest spoke, I watched the poplars, the thin branches trembling in the wind like aspic. But this row of poplars behind the sausage stalls wasn’t at all familiar. The tin sheets glistened, beautiful. Beside one of the stalls, a two-wheeled cotton candy cart gathered rust. There’s a way through the concrete fence here somewhere, into a vacant lot you can cut across to get to Erdősor Street. I hear the murmur of cars, a pig grunting in a nearby yard. The pig was the only one the Old Guy could speak nicely to. Several times a day he hobbled out to it and coddled it. The pig got all the leftovers, this six-hundred-and-sixty-pound animal that could barely turn in the sty but the Old Guy wouldn’t think of slaughtering it.  I soon understood this. Someone who spent their entire working life murdering, gutting, carving, chopping, and weighing animals wants to right a wrong. The pig didn’t bother my mom, it was only the filth that irked her. There was nowhere to sit in the three-story house, the muck glued things to the ground. The Old Guy used the bath as storage and unplugged the fridge every night. There were always strangers sitting on the veranda, men from the neighborhood listening to the Old Guy’s stories about the butcher’s shop. They waited in case something came their way, a bottle of wine, two thousand forints. Pruning the tree, raking the leaves, sweeping the sidewalk. Still work but the easier kind.

You just had to put up with the Old Guy.

I walk next to the train tracks in the direction of town. I’ve no idea what I’m doing here but I came here once before too. I was packing up a few things at mom’s house, afterward, I didn’t want to go home. I got on the bus in the opposite direction and came out to the old Polish market. At first, it seemed a good idea, but then it just stirred up more memories. I pull my coat around myself in vain, I just get colder. There’s a lot of traffic on the main road that runs beside the tracks, the headlamps blind me. A few minutes later I see a restaurant. It looks like it’s been here thirty years, but I don’t remember it. The fat, plastic chef planted on the sidewalk holds a wooden spoon in one hand and waves me in with the other. There are red chequered cloths on the tables, exactly as I had imagined. The place is empty, not even a waiter. The wall clock chimes, it’s five fifteen. After the funeral, my daughter and I ate somewhere similar. It looked out onto a wildlife park, behind the wire fence mouflons were having a siesta, a stream bubbled at their feet, and we flicked through the menu in silence. My mom always ordered beef stew with galuska and pickled cucumber. My daughter ordered a Caesar salad with croutons. The waiter didn’t know what croutons were, and I only know them because of Zoltán. We stood arm-in-arm in the frozen-food section at the supermarket. Levesgyöngy, ‘soup pearls’, such a pretty word, we swirled it around in our mouths, Lipizzan, too. We traveled lots but never made it to Lipica, or to the Plitvice Lakes.

I’m sure his new girlfriend is treated to the same. 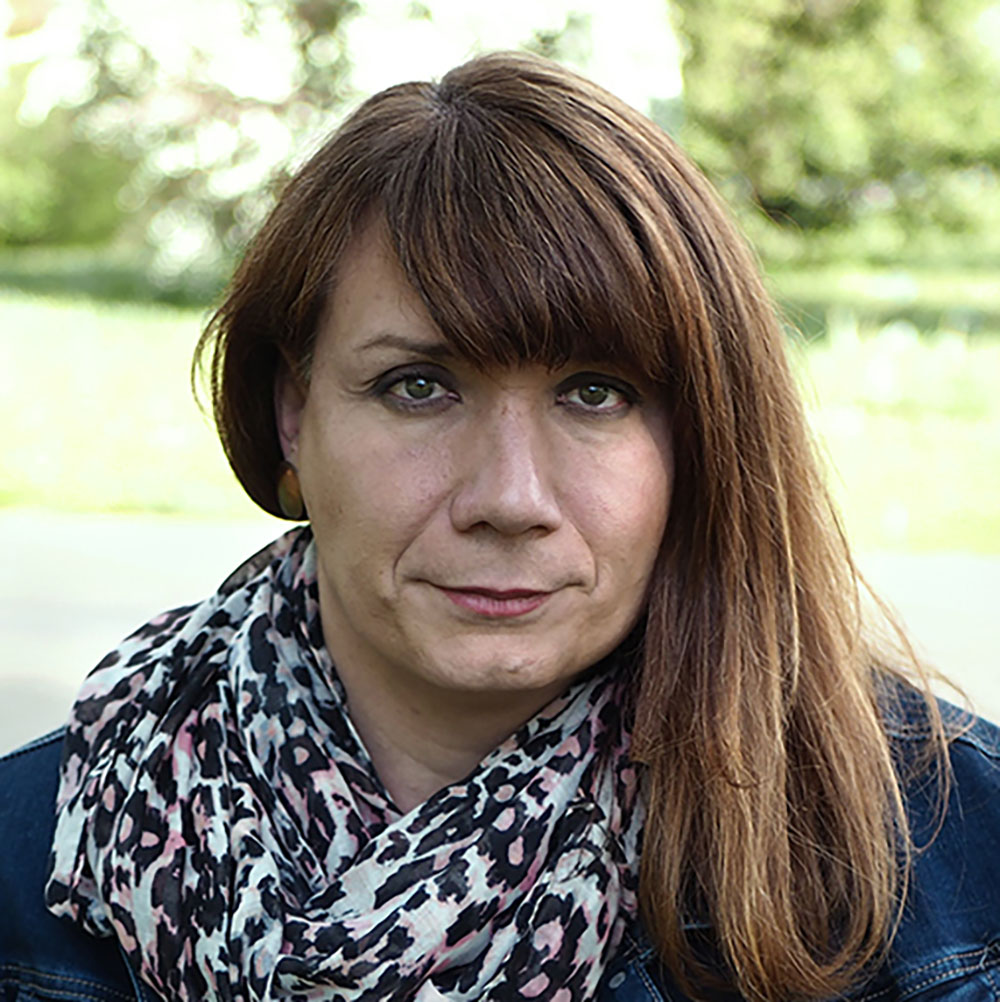 END_OF_DOCUMENT_TOKEN_TO_BE_REPLACED

Murder in the 17th District by Tibor Noé Kiss
In this short story by Hungarian writer Tibor Noé Kiss, a woman comes to terms with her mother’s death, while looking back on a mysterious chapter of her love life.